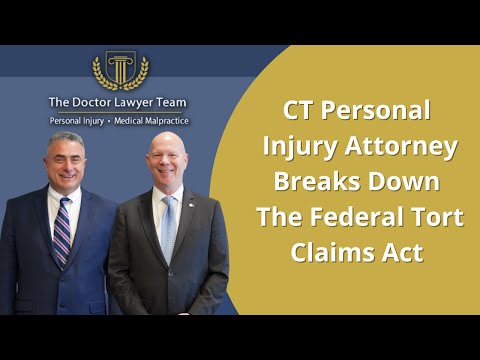 Hi, I'm Paul McConnell from the doctor lawyer team. I'm going to talk to you today about the Federal Tort Claims Act. That is, what is the Federal Tort Claims Act and how does it work? The doctor lawyer team is a veteran owned Personal Injury medical malpractice firm that's devoted to helping clients who've been injured by negligent acts of federal employees acting within the scope of their employment. The Federal Tort Claims Act is the federal law that provides for the exclusive way for victims to seek compensation when they are injured by federal employees acting within the scope of their employment. For example, when at the Veterans Hospital, VA hospitals, if somebody's injured it for medical malpractice, it'd be a VA hospital or at a military hospital or if somebody's involved in an automobile accident with the US Postal Office truck. Those are some examples. And we have some videos that go into some more details of what is and what isn't covered by the FTCA. How does it work? Well, first, a little bit of history before it was enacted in 1946. If somebody was injured by a federal employee, they were barred from getting any compensation because the federal government had sovereign immunity. There were some exceptions to that. But the only way to to get any type of compensation was to go to your congressman and have a private bill introduced in Congress who can imagine how many people didn't get compensation and those that influenced it. But in 1946, they enacted the Federal Tort Claims Act. And now there's a statutory framework by which people United States can bring lawsuits when they're injured by federal employees.

There's two major areas that this involves, first is administrative claims. That is before you can bring a lawsuit like you think about in state court when you're injured in an auto accident. on federal law, before you can bring a lawsuit, you have to exhaust your administrative remedies. What that means is before you file a lawsuit, you have to file administrative claim with the appropriate agency. That has to be done within two years of the Act giving rise to the claim. And the administer the appropriate agency, for example, might be the Department of Defense, it could be the Department of Veterans Affairs, it could be the United States Post Office. But anyway, you have to file administrative claim as the first part of this process. Then, with six months after you submit the claim, or six months after it's rejected, if it's rejected, then you have the opportunity to file a lawsuit but you don't file a lawsuit in state court like you do another towards the Federal Tort Claims Act you file in United States District Court.

Again, in each of these areas, whether it's the administrative claim process or filing a lawsuit, there's lots of rules and areas for pitfalls that are beyond the scope of this video. But this is a little introduction to the Federal Tort Claims Act and how it works. We hope you find these informational videos helpful, please contact the doctor lawyer team at the number on your screen if you'd like to get some more information, and we're here to help build different join the team.