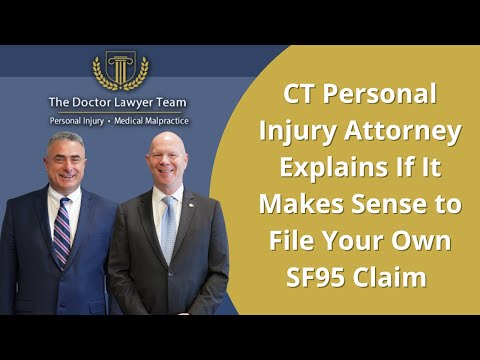 Hi, I'm attorney Paul McConnell from the Doctor-Lawyer Team. Today I'm going to talk to you about whether you can represent yourself and file your own SF 95 claim under the 14 Federal Tort Claims Act. Now, if you're watching this video, you already know something about Federal Tort Claims Act. And because you're considering whether or not you should be filing your own claim, the short answer is, yes, you can you can file your own claim.

We've seen lots of people do it many times someone's success, some without success. It's you may be thinking to yourself, well, this is a way I can save on attorneys fees. That's true, you can. But there's a number of things you should consider about whether it makes sense whether you want to, even though you can. First you should consider, okay with respect to attorneys fees, unlike state personal injury cases and medical malpractice cases where attorneys charge on a contingency basis and they ask for a third. And under the Federal Tort Claims Act, the statutory cap is 20% for attorneys fees at the administrative claim phase. So it may not be as much as you may have thought. And additionally, you need to consider what's the quality of that first impression. When the person on the other side that receives the claim at the torts branch for the Department of Veterans Affairs or the torts branch at the post office?

What's the first impression they get when they get a claim from somebody who's representing themselves as juxtaposed against the claim that we might put together an experienced attorney might put together under our letterhead with the attachments and that that we would know to include? So you may want to consider the first impression. Also, with respect to negotiations, what if the branch decides that they do want to make some sort of offer because there was negligence? How serious are they going to be negotiating with you versus negotiating with an experienced attorney. So that's something you might want to consider. Also, with respect to filing a lawsuit in the event, Your claim is denied? Well, you're only going to have six months from the time of the denial in which to file a lawsuit in federal district court, you may be thinking to yourself, well, that time, that's what I'm getting an attorney. And to be sure there are times when we've accepted cases from people representing themselves to the through the claims process, and then we will be accepted the case. But there's also lots of times when we don't, when we reject them, particularly medical malpractice cases where they are often very complicated. And there is a significant amount of time and due diligence that goes into evaluating the case. And there's also a lot of time that goes into preparing your case before the lawsuit can be filed. So we're not involved with the case to the administrative portion of it, where we've already gotten to know you gotten to know the facts gotten to evaluate the pros and cons and the strengths and weaknesses of your case when we're not involved in that. Six months is oftentimes too tight a window for us and we reject lots of medical malpractice claims that way, other attorneys that practices in this area, see it the same way. I'm quite confident that because I know most of them. In any event, can you represent yourself? Yeah, you can. But just consider these facts whether you want to or not, in terms of saving that 20% on attorneys fees.

We hope you find these videos helpful. Call us at the doctor lawyer team at the number below on your screen. We're happy to help and remember built different join the team.