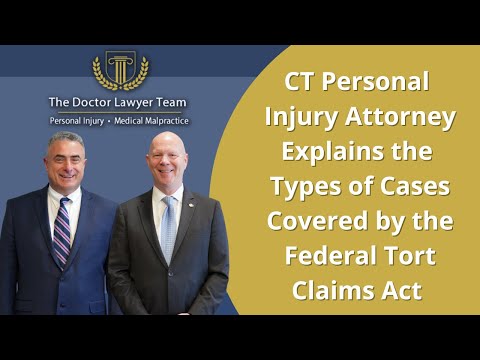 Hi, I'm attorney Paul McConnell from the Doctor-Lawyer team. And I'm going to talk to you today about the types of cases that are covered by the Federal Tort Claims Act. The doctor lawyer team is a veteran own personal injury medical malpractice firm, and we're devoted to helping clients have been injured by knowing the kind of negligent acts by federal employees.

So what types of cases are covered by the Federal Tort Claims Act? Generally, cases that allege a negligent act by a federal employee that caused you damages. That's kind of a nutshell. For example, these include medical malpractice claims against the against the VA hospitals could include medical malpractice claims against the Department of Defense or military hospital or by any federally funded health clinic. It also involves automobile accidents if you're involved with an accident by a federal employee who's acting within the scope of his employment. For example, a post office truck could also be a military recruiter who's driving a government vehicle and he's acting within the scope of his employment can include slip and falls that occur at the post office or any other land that's owned by the federal government.

There are certain types of cases that are not covered by the Federal Tort Claims Act. For example, intentional torts, like assault and battery can be some exceptions to that for law enforcement, but those are brought under a separate body of law for constitutional claims. Animal Admiralty claims are brought under the animal Admiralty act. You can't sue government employees that are fulfilling their job in terms of policy decisions, for example, because you don't like the way the President is doing his job or some decision that he's made or a US senator.

In conclusion, we hope that you found this information videos helpful and please contact the doctor lawyer team at the number listed below. build different join the team.