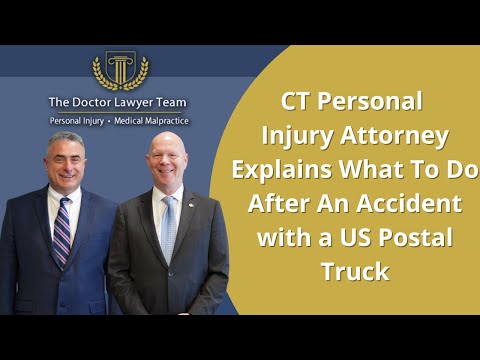 Hi, I'm attorney Paul McConnell from the Dr. Lawyerr team. I'm going to talk to you today about what to do if you've been injured in an accident involving the United States Postal Service truck. First, the doctor lawyer team is a veteran owned Personal Injury medical malpractice firm devoted to helping clients that have been injured by the negligent acts of federal employees acting within the scope of their employment, for example, getting involved in an accident involving a postal carrier who was doing his job at the time. So what do you do?

First of all, as with any accident case, the first things you do is you call 911. Because you need to take care of yourself if you're injured at all, or anybody else for that matter. And also, when you call 911, the police are going to come and they're going to do a police report. And it's important to get that objective report as opposed to just exchanging insurance and driver's license information. In addition to that, you're going to take photos, take lots of photos of the scene, go back to around where the streets are, etc, take a lot of photos.

And the next thing you need to do is you need to contact an attorney and more importantly, an attorney that's experienced with the Federal Tort Claims Act, not the attorneys on the billboards. And the reason you need to have an attorney with read that's experienced in the Federal Tort Claims Act is because that's where your claim is going to be pursued. It's not going to be like other automobile accident cases that involve state court, it's going to be against the United States Postal Service. Okay. And there's several components to that. The first is before you can even file a lawsuit, you're going to file administrative claim with the United States Post Office, an SF 95 form. And if you were to hire us, for example, we'd help you put that together in terms of making sure it's the strongest claim possible, by having attachments such as the police report, photographs, medical records, billing records, and the like. And even more than that, to be perfectly honest, so and then when you submit it to the post office that's kind of akin to other automobile accidents where you deal with insurance companies once then you're dealing with the tort claims brand for the United States Postal Service. That's who you're going to be dealing with negotiating with in terms of trying to get a fair settlement.

Then if you're unable to get a fair settlement from the Postal Service, then the option is to file a lawsuit, but you don't file a lawsuit in state court. Instead, you file in the United States District Court, and federal courts have their own set of rules.

In any event, remember, call 911 Take pictures contacting an attorney that's experienced with the Federal Tort Claims Act. We hope you find these videos information videos helpful and work please contact us at the number listed on your screen. Built different join the team.