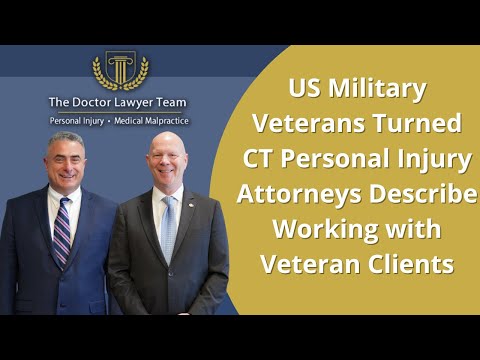 Hi, I'm Paul McConnell from the Doctor - Lawyer team. I'm here with our in-house counsel, Dr. Mike. We're going to talk to you about our veteran background that gives us an advantage. We think this can help us represent our veteran clients. What am I talking about in terms of representing veteran clients? Well, we have kind of a niche practice here in the Doctor - Lawyer team. In addition to our standard practice of medical malpractice and personal injury, we also represent veterans across the nation under the Federal Tort Claims Act and other things such as the 1151 applications which Dr. Mike's gonna talk about in a second. The FTCA, Federal Tort Claims Act, for example, suing the military hospitals with VA hospitals for medical malpractice, or the United States Postal Service involved in a truck accident with the postal carrier. So, those are the types of claims we have. And we're gonna talk a little bit about our veteran background and what that brings to the table. So, Mike, share what you know, what's your rhetoric, background and experience?

Sure. So I'm a retired naval medical officer with 31 years of service. I served in everything from submarines in the beginning, diving in the Navy, the Marine Corps in 1994, and combat tours. So, working as a field medical officer, as well as sometimes the Navy, sent me to go work as a neurosurgeon in a Naval Hospital. A part of almost every doctor's training in the United States is you spend time in the VAs. I think I worked in three different VAs – Manhattan, Iowa City, and the St. Louis VA, as part of the training. So, I've seen VAs. I've seen military hospitals, practicing both whether it's war time or in peacetime.

I know about military life. I know how Military people think and how families think, which is important, because sometimes, people don't realize we think just a little bit differently.

I think people know from reading your bio, you were also deployed in both Iraq and Afghanistan.

And just for the benefit of our viewers, my background was, I served similar to Mike 30 years since we're getting along in the teeth, both retired and retired Colonel in the United States Marine Corps. I was originally an infantry officer deployed in the Gulf War. Then, later, I was a judge advocate and was a judge in the Marine Corps and later went into private practice. So, first as a federal prosecutor, then private practice. And like Dr. Mike, I was also deployed in the aforementioned Gulf War, and then later to Afghanistan. So, you know, bringing those experiences to the table as well. So, we bring those experiences to the table while working a great deal. I was a judge of two of the ABA grab trials.Some of the other folks don't even know what we're talking about. They were interesting cases to be sure. So, let's talk about what our background brings. And if you (Dr Mike) want to chip in terms of 1151 claims or Federal Tort Claims, what does it help?

Well, sure. I mean, Federal Tort Claims, again, are gonna be the medical malpractice injury type cases where you have to prove a military or a government doctor in general, VA or government doctors,has done something below the standard, or the hospital did something below the standards expected of them that cause client harm. Those are really no different than claims in a regular state court but there's some technical differences that has more to do with processes – how the government does things. However, an often overlooked type of claim is what's called in the VA and 1151 claim. These don't have to be full malpractice or negligence. So, for instance, if a veteran is at a hospital, VA hospital, and he's harmed. If, it can be shown that the harm was done during the time he was being cared for at the VA, then there's two avenues under which he can collect one. Of course, if there was some kind of negligence, there's actually that claim, and there could be a malpractice claim. But the other avenue which people often overlook is that if it's an unforeseen complication, something really no practitioner would have said, “Hey, this is a risk of this type of surgery.” The VA has these reviewed by experts, I actually do some of these types of reviews for the VA. And if the expert says, “Hey, this is a crazy complication, this guy's really pretty damaged, but no one would have ever thought of this.” One person can collect under that. So, it's a little technically different from a regular claim. But since we're VETs and we know about these things, we know about the VA. We both go to the VA for our care. We can really focus you in the right direction.

And also having been through the disability claims process coming back from combat, we're familiar with everything. Veterans and family members have been through an experience. I guess we should also add that before I was a federal prosecutor while I was primarily a criminal prosecutor, I did have some experience in defending claims under the Federal Tort Claims Act. What happens is when you file a lawsuit, first you submit a claim (covered in our other videos). Iif sometimes, we'll file a lawsuit, when you do file in district court, and then the local United States Attorney, whether it's here in Connecticut, New Haven, St. Louis, or California, wherever the local US attorney is, they're the ones that defend the United States. They defend the PA or the military hospital. So,I have exposure experience. My experience in the US Attorney's Office being on the defense side, and then if you read my bio, you know that when I was a young Judge Advocate, we were involved on the defense side of claims.

In other words, you know, how the other side thinks.

That's right, and how the process works and approvals. We know various levels of approvals, but anyway, we’re getting too far in the details. So, we just kind of wanted to give you an overview. I hope you found this interesting and helpful. We look forward to hearing from you.